When we talk about the egg foo young recipe, egg foo young is a dish prepared with beaten eggs and most often minced ham. It may be made with various vegetables such as bean sprouts, bamboo shoots, spring onions, sliced cabbage, water chestnuts, and mushrooms, mixed with meats such as crab meat, shrimps, minced chicken, pork, or any other meat.

What is Egg Foo Young?

Egg foo young is a Chinese egg omelet dish made with vegetables like peas, bell peppers, and carrots with an easy gravy topping. Egg foo young is a perfect, easy recipe to round out your favorite Chinese takeout meal made at home.

You don’t need a lot of ingredients to take a classic Omelette from a breakfast dish to this Chinese restaurant favorite. Egg foo young appears on Chinese menus in some countries as ”Omelette” sometimes they might be smaller and at times as large as dinner plates.

Egg foo young can be made with almost any vegetables and protein because it is a recipe that evolved as a way to use up leftovers. You can actually use any vegetable available in your kitchen to make egg foo young. 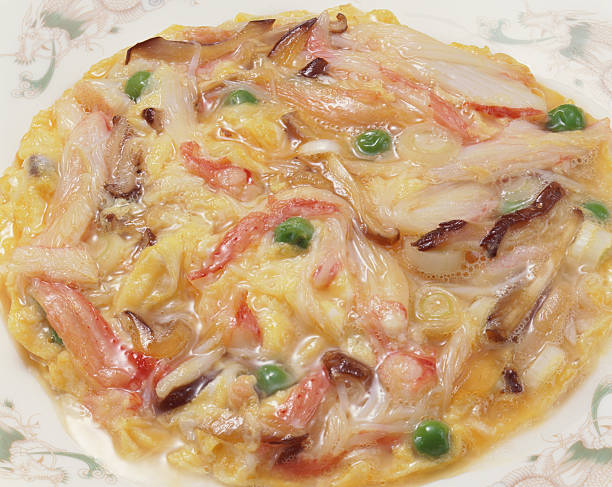 This simple recipe shows you how to make egg foo young from your own kitchen with just a handful of ingredients and a skillet. Egg foo young is quite simple and easy to make and it doesn’t take much of your time.

Even if you don’t know how to go about making it, this recipe is also for you, just follow the recipe a step at a time and I am sure you will make delicious egg foo young.

This recipe is the best egg foo young I have ever had. Hope you enjoy it too. To serve, place egg patty over steamed rice and put the sauce on top.

In the Netherlands, which has a local variation on the Chinese Indonesian cuisine, it is known as foe yong hai, which is usually served with a sweet tomato sauce.

When egg foo young is made at home it is one of the healthiest Chinese takeout meals while restaurants tend to cook the Omelettes with a lot of oil, if made at home the oil can be reduced and it will be low fat, low carb, and high in protein dinner or breakfast option.

You can as well load it up with extra nutrition by topping it with a handful of extra vegetables like bean sprouts. Because egg foo young is made with eggs, it’s rich in protein, containing 106 calories and 10 grams of protein in a single patty (86g). Egg foo young also contains vegetables which increase the fiber and nutrients content of the dish.

You can as well mix in any leftover meats you have. Just make sure that the meat is cooked ahead of time. But at times you can add the meat raw when mixing with other ingredients.

How to Prepare Meat for Egg Foo Young

Add all the ingredients to a small sauce pan and whisk well to incorporate before the liquid heats up. Cook and whisk until thickened.

How long does it take to Prepare Egg Foo Young Gravy?

Egg foo young is a Chinese omelet egg mixed with vegetables and usually, some type of protein (shrimps/prawns or pork are common) then smothered in a Chinese stir fry sauce. It is often made with vegetables like carrots, bell peppers, and peas with an easy gravy topping.

Egg foo young is packed with many nutrients. Because it is made with eggs, it’s rich in protein, containing 106 calories and 10 grams of protein in a single patty (86g).

Egg foo young also contains vegetables like onions, peas, and carrots, which increase the fiber and nutrient content of the dish. I hope this recipe was helpful to you…Enjoy your delicious egg foo young.